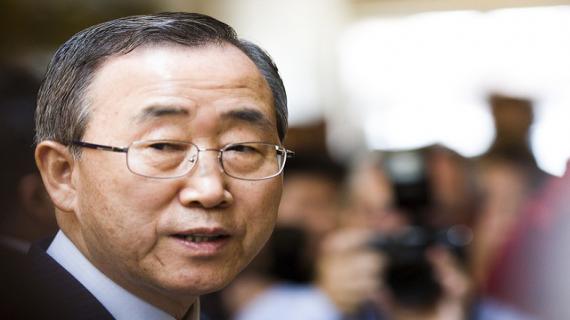 A few days ago, I wrote in this space about my hopes and aspirations for Ban Ki Moon’s visit to Algiers and the Polisario gulags around Tindouf . I counseled straight talk with the leaders of Algeria and Polisario about the need for a genuine compromise to achieve what the Security Council endorses as a “mutually acceptable political solution” and urged that he make clear that realism, not more propaganda and bombast, was the road to resolution. I also encouraged frank discussion about the need for a census of the camps and a UNHCR sponsored program to allow those who wished to return home to do so in dignity. Finally, I suggested he raise the issue of the massive, and well documented, Algerian and Polisario fraud associated with humanitarian assistance to the camps.

We got none of that from the Secretary General’s visit. Instead, we got what can only be described as an epic fail in the UN effort to break the logjam on honest negotiations for a realistic political solution. Hard to decide if Ban’s inflammatory, destructive, injudicious and undiplomatic comments represented incompetence by design or accident, but it was clearly one or the other.

The UN’s neutrality is a critical element if it is to serve as an honest and unbiased intermediary in facilitating negotiations among the parties. Ban pretty much blew that, and his personal trustworthiness, out the window when he called Morocco’s presence in its southern provinces an “occupation.”  This language is straight from the Polisario’s standard propaganda script, and no other UN official has ever uttered such a biased remark. What could Ban Ki Moon and Chris Ross, his Personal Envoy, have been thinking when they crafted that phrase for public consumption. Maybe Ban is seriously out of touch with what is happening on the Western Sahara dossier, but Chris Ross was right there with him while the Secretary General went about destroying his ambassador’s prospects for building trust and confidence for meaningful negotiations.

As if that word alone was not enough to scuttle chances for a compromise, mutually acceptable political solution, Ban further ignored the “first rule of holes” and continued to dig deeper when he said that the UN remained ready to facilitate a referendum on the future of the territory.  Ban should have done his homework a little better and paid a bit less attention to the Polisario media script.  The Security Council has made no mention of any referendum since 2003 when this idea was dropped by both the Council and most of its permanent members. Instead, the Council has repeatedly called for a negotiated political solution.  Instead of building momentum for such an approach and empowering his Personal Envoy to push this singular line, Ban seems to have attempted to revive an approach that was declared kaput over a decade ago.  Washington walked away from this approach in 1999 and the rest of the Security Council abandoned it as an utter failure in 2003. Again, was Ban trying to facilitate a negotiated political solution here or ensure that the logjam continues for the remainder of his tenure as Secretary General?

I can understand Ban’s sympathy for the women and children living in the Polisario gulags. I visited them many times while I was still an active US Foreign Service Officer and can attest first hand that conditions in those camps are atrocious.  But the major responsibility for those conditions lies not in any lack of generosity on the part of the international donor community. We do not need a donor’s conference to raise more money for humanitarian relief for the camps. More than enough relief is being provided already. What we need is to stop the industrial-level theft of the assistance by both Algerian and Polisario officials for personal profit.  Ban should read the reports of the Inspectors General of both UNHCR, the World Food Program, and the European Union’s anti-fraud office and insist that Algeria and Polisario clean up their act before any further assistance is allocated to those camps.

Finally, Ban should educate himself concerning the circumstances of those refugees who have succeeded, by their own means and often at great personal risk, in escaping their Polisario captivity and returning home to Morocco.  Today, they live freely in Morocco. Not a single one of the roughly 8000 who have made that choice has suffered any negative consequence on their return home. Clearly, conditions for voluntary repatriation exist, and to pretend otherwise defies readily available evidence for any who wish to see it and quite simply plays to the Polisario propaganda line that Ban was endorsing.

Ban’s visit to Algiers and Tindouf turns out to have been a singularly bad happening for all who hope to see this conflict resolved – first and foremost the tens of thousands of Sahrawi families who have been separated by it. Ban did neither the Sahrawis nor the cause of peace and security in the Maghreb any favors with this visit. Too bad.  Maybe the next team will do a better job of it.