European Court Of Justice Must Avoid Row With Morocco

On February 27, 2018, the European Court of Justice (ECJ) is expected to issue an important decision that would to significant extent determine the future of EU’s relationship with North Africa, particularly Morocco.

The decision, relates to a review of the international fisheries agreement between Morocco and the European Union that allows 126 ships, mainly Portuguese and Spanish, to fish in the Moroccan waters, including waters rich in fisheries resources adjacent to Saharan provinces.

This decision, which would not discuss the classic legal questions, rather has the potential to trigger a series of political and diplomatic upheavals.

The Court’s impending ruling has been fueled by a campaign for the European Union’s fisheries deal with Morocco to be declared invalid because it includes Western Sahara, a disputed territory.

Western Sahara has been contested since 1975 when Spanish colonial powers left. Morocco claimed the territory as it own and fought the 16-year war with the Polisario Front independence movement which established its self-declared Sahrawi Arab Democratic Republic.

While the United Nations maintains that the region has a right to self-determination, campaigners have sought to challenge the EU’s trade deals with Morocco in the courts because they include the desert region.

Britain has asked the ECJ for advice after British-based campaigners criticized Britain for upholding the EU-Morocco fisheries deal.

Ahead of the ruling, the ECJ’s Advocate General, Melchior Wathelet has asked the Court to review the EU’s international fishing agreements to terminate the fishing agreement between Europe and Morocco, since any agreement concerning the Sahara than the Polisario could not apply.

If that position is upheld by the Court, it is likely to reignite a diplomatic dispute between Brussels and Rabat that erupted in 2016 when the lower General Court ruled that the EU trade deals dating from 2000 and 2012 with Morocco were void.

Morocco briefly suspended contact with the EU to lodge a legal appeal, after which the EU’s top court later quashed the lower court’s decision, saying the trade accords were valid but could not include Western Sahara, appearing to sidestep the issue.

Pandora's box
If the Court was persuaded to act accordingly, this would turn into an institutional revolution. For the first time in Europe, a Judge would head diplomatic policy, which is the exclusive responsibility of the Executive. This would be a violation of the oldest constitutional principles: separation of powers.

Moreover, if the Court follows the recommendations of its Advocate General, any association of Kurds, Catalans, will be able to file similar claims in connection with lands and waters owned by member states where those groups lay political claims to their territories. For example, the Association Agreement between Europe and Turkey, could be terminated on the grounds that it is being wrongly applied to Kurdish areas that demand their international recognition based on the principle of self-determination.

The Catalan Esquerra Republicana, would in turn go to court to ask that international agreements between Spain and the Union not apply to the region of Catalonia. Thus, if the Court follows the recommendations of the Advocate General, this would lead to an endless spiral of legal claims, a specially against Israel, whose agreements with Europe will be challenged in the Court based on claims of violation of the United Nations resolutions, fundamental rights, and the permanent sovereignty of the Palestinian people over their natural resources.

This is the risk of the earthquake that could occur on February 27 if the European Court of Justice follows the conclusions of the Advocate General. The Court’s decision would have implications like the famous Lorenz’s butterfly effect, creating 3000 km of disorder in the south, on the edges of the Mediterranean. Morocco, an old nation with a thousand years of history, cannot stay idle while this happens.

It would be inappropriate if this earthquake happens on February 27.

But it is true that big catastrophes do not arrive in the form of a crash, but in the jumps of a dove ...a legal dove. 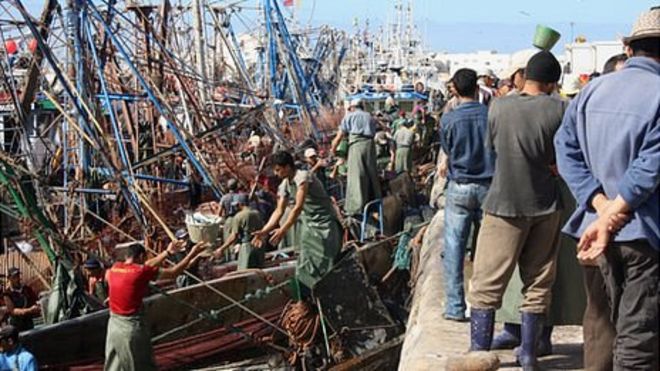