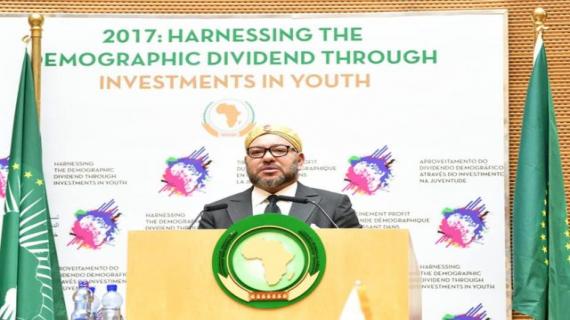 On the 41st anniversary of the Green March, Mohammed VI has addressed the Moroccan people from Dakar, Senegal in defiance of those handful countries that, now and then, slam the country on its Moroccan Western Sahara policies and rightful presence there and, also, those who believed that Morocco is poised to embark on a popular revolution, in the aftermath of the death of the fishmonger of Alhoceima.

The capital meaning of the Dakar address is that Morocco is fine and stable and is no Tunisia of 2010, thank you very much, and Morocco is, also, at home in El Ayoun, Smara and Dakhla.

Morocco in Africa: a duly return to the roots

In one of his memorable speeches, the late King Hassan II stated metaphorically that Morocco is a big tree with roots in Africa, trunk in the Arab-Muslim world and branches in Europe, meaning clearly that this country is multi-dimensional, multi-cultural and multi-ethnic and always open to all friendly and loving people and nations.

The first contacts of Morocco with Africa go back to the Amazigh dynasty  of the Almoravids (1040-1147,) who made incursions into Western Africa doing business and converting local population to Islam. Some historians argue that the Almoravids were responsible for the destruction of the Empire of Ghana (Ashanti Empire) around 1078, others deny such an act, but, all in all, they have surely initiated caravan trade between the North and the West of the continent, which was to become an unfair trade exchanging salt for gold.

The Almohad Caliphate (1121-1269,) another Amazigh dynasty, further established contacts in West Africa and Sudan and set up gold trade with the weakened Ashanti tribes. Slowly but surely Islam replaced animism and local religions and religious lodges and koranic schools made their appearance in Africa. The Koranic influence led to the appearance of Ajami, a Koranic alphabet written in Maghrebi fashion which was used to write the local languages such as Wolof, Pulaar, etc.

The trade caravans started in Tinmel, now a Moroccan city in ruins, traversed most of the Moroccan Western Sahara desert to arrive at Timbuktu, where goods were exchanged.

Sidi Ahmed Tijani (1735–1815), an Amazigh Sufi master and Sheikh was born in the city of Ain Madhi in Algeria, then later, at the age of 21, moved on to Fes where he established a Sufi religious lodge and took courses of Islamic religion at the world’s oldest and most reknown Qarawin University. He excelled in his learning and soon became sheikh dispensing religious knowledge to students coming from all over the world. He founded the Tariqa Tijaniyya (order) in 1780.

Many students from Africa became his disciples or murids and later sheiks, who spread his religious doctrine all over Africa and, thus, his influence reached out to all the continent and became well-established, then and now. Sidi Ahmed Tijani died in Fes after 80 full years of Sufi preaching and was buried in his lodge in the medina of this city.

Today, the Tidjanes adepts are millions in West Africa and the order is very well-structured and organized in Senegal. Political leaders have to receive the blessings of the Tidjanes orders to become presidents in this part of Africa.

For many Tidjanes around Africa, coming to Fes to visit the lodge of their master Sidi Ahmed Tijani is considered a “small pilgrimage,” in comparison to the pilgrimage done in Mecca, and for many of them Moroccan monarchs are considered their amir al-mu’minin“Commander of the Faithful.”

So, for all the Tidjanes of Africa, having their supreme Caliph Mohammed VI make an official address to his people from Dakar, Senegal is an immense honor and the ultimate expression of Sufi exhilaration and worldly joy.

Since becoming king in 1999, Mohammed VI has made of Africa his favorite ground for cultural and economic exchange and that well explains why there is a map in the background when he was making his speech to the Moroccan people from Dakar, Senegal on November 6, 2016.

Initially, most of his African trips were to French-speaking West and Central Africa, now he has moved to East Africa to initiate win-win economic exchanges and joint-ventures.

Morocco is mobilizing necessary capital for much-needed economic development and offering financial and technical expertise in such areas as:

As such, Moroccan companies like: Maroc Telecom, Saham Assurance, Banque Populaire, Attijari Wafa Bank, BMCE, ONEE, OCP, ONA, Ynna Holding, Doha etc. have become brand names and the carrier Royal Air Maroc, with its hub in Casablanca, is one of the most popular airlines in Africa. It once owned Air Senegal and since the recent visit of Mohammed VI Senegal, it is considering code-sharing and cooperation with this airline anew.

“Lured by economic growth rates as high as 10 percent and a desire to position itself as an investment and trade bridge linking Africa and Europe, Morocco doubled exports to sub-Saharan Africa from 2008 to 2013. Its investment in Africa reached about 1.4 billion Moroccan dirhams ($145 million) last year, according to the Rabat-based foreign exchange regulator, about a third of total investment. A regional finance hub is being built in the coastal city of Casablanca.”

They steadfastly went on to detail Moroccan economic intervention in this country, which has special relations with the kingdom, in banking services:

“Attijariwafa Bank, Morocco’s biggest lender, has 312 branches in West Africa. It helps finance many of the kingdom’s regional projects, including the 100 billion CFA Francs ($171 million) cleaning of Abidjan’s lagoon, the largest of about four dozen accords signed during Mohammed VI’s visit.”

And in the rest of West Africa:

“Maroc Telecom bought Emirates Telecommunications Corp.’s West Africa operations this year for $650 million and plans to invest 1.6 billion dirhams more in the region over the next five years. Royal Air Maroc flies from Casablanca to about half of the 48 countries in sub-Saharan Africa.”

The number of African students in Morocco in 2016 is estimated at 18,000, according to Lahcen Daoudi, Minister of Higher Education, spread all over the country in public and private universities and higher institutes. Most of them benefit from Moroccan scholarships covering their school fees and sustenance.

There are, also, hundreds of African students acquiring military instruction in the various military academies of the country.

Morocco, also, trains scores of African religious students due to become Imams in their countries, in the philosophy of Wasatiyya (middle of the road) or moderate Islam that encourages interfaith dialogue, respect of the other and inter-cultural communication, in the new Imam Academy inaugurated by Mohammed V[ii]

Indeed, the most important achievement in the present monarch’s progressive management of the faith issues is the opening, on March 27, 2015, of Mohammed VI Institute for the Training of Imams, Morchidines and Morchidates, initiated to play a leading role in fighting religious radicalism.

The Imam Academy is, probably, the first organized reaction to the massive fundamentalist tsunami in religious preaching and education. Until now, radical Islam, quite aptly, had the upper hand in religious education, or rather, religious indoctrination, brainwashing the youth in hating anyone standing against their philosophy – especially the West, for its secularism and democracy.

This institute is training Moroccan students as well as clergy from countries such as Nigeria, Chad, Guinea, Côte d’Ivoire and France. Soon students from Tunisia and the Russian Federation will join.

The various students civilian or military prove to be, on return to their respective countries, ambassadors of goodwill, understanding and peace.

Morocco, since the reign of the late king Hassan II has duly invited African religious scholars to attend and take part in the Hassanian Religious Lectures given in the presence of the Moroccan monarch and high officials and ambassadors of Islamic countries during the sacred month of fasting: Ramadan.

This year to highlight his religious clout among Sunni Muslims, Mohammed VI has inaugurated an association of African ulemas tocounter religious extremism and spread moderate Islam that calls for peace and coexistence between creeds and cultures.

Because of all the above, one can say without exaggeration, complacency or lip service motives and intentions that Mohammed VI is, undoubtedly, the true and sincere Caliph of Africa.

Dr. Mohamed Chtatou is a Professor of education science at the university in Rabat. He is currently a political analyst with Moroccan, Gulf, French, Italian and British media on politics and culture in the Middle East, Islam and Islamism as well as terrorism. He is, also, a specialist on political Islam in the MENA region with interest in the roots of terrorism and religious extremism. He is teaching Community-Based Learning, Moroccan Jewish Heritage and Amazigh History and Culture to American students at Amideast/Morocco in Rabat, and History of North Africa to IES (Chicago) semester abroad program students, and Introduction to Moroccan Culture and the Arab Spring to CIEE American students and, also, interpersonal and business communication as well as translation and interpreting at the Institute for Leadership and Communication Studies (ILCS) in Rabat, Morocco. During 2015 he worked as Program Director with the USAID/CHEMONICS educational project entitled: “Reading for Success: a Small Scale Experimentation” in cooperation with the Moroccan Ministry of National Education and Vocational Training (MENFP). He was born in the Amazigh village of Ajdir, which is situated north of Taza (Rif Mountains), in a French colonial prison in 1952 because his parents were imprisoned for being Liberation Army officers fighting French colonialism for Moroccan Independence. He graduated from Mohammed V University in English studies, with honors in 1976, then went to England where he did a General Diploma in theoretical linguistics at University College London in 1977. In 1980 he got an MPhil from the School of Oriental and African Studies –SOAS- of the University of London in Amazigh Studies, and in 1982 a PhD in Amazigh language and anthropology. From 1983 to 1987, he worked for Peace Corps Morocco as Language and Cross-Culture Coordinator and later on as Project Director. He served several times as inter-port lecturer in Middle East politics and culture with the Semester at Sea program of Pittsburgh University. In 1987, he joined the Islamic Educational, Scientific and Cultural Organization –ISESCO- where he worked until 2013 as a program specialist and later on as a director at the Directorate of Education (worked on functional literacy, women empowerment, education planning, curriculum design, teacher training, education of rural women and girls, special education, higher education, etc,),then director at the Directorate of Culture (worked on dialogue of cultures, inter-faith dialogue, women in development, cultural production, etc.) and directo rat the Directorate of External Relations and Cooperation (worked on cooperation with UN agencies, UNESCO, Alliance of Civilizations, WHO, FAO, UNFPA, etc.). During his work for ISESCO, he set up educational programs to teach peace and combat religious radicalism among the youth in various countries of the Muslim World. He also trained trainers in this particular course and helped design specific curriculum. He lectured in education at the Faculté des Sciences de l’Education of Mohammed V University since 1996. He has conducted over 200 trainings in education, literacy, women empowerment, culture and development in Africa, Asia, Europe and the Americas. He has published several books on language and culture and over 80 articles in Arabic, French, English, Italian and Spanish in his areas of specialization.