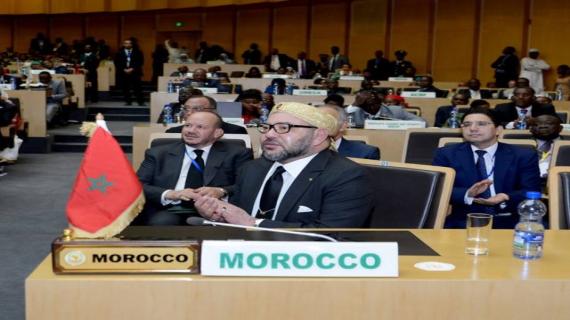 Morocco has always already been African, in a pholospphical sense. Once you go back to a period in the past, you will find that something had already happened before that moment that proves the African destiny of this North African but ancient land.

The historical facts are there to prove a sense of belonging, an intricate web of cultural and religious links and linkages, economic ties and a relentless movement of people and goods over the Sharan trade routes… These founding events, if we care about beginnings, already exist in Antiquity and early Middle Ages, at the time of the Berber Kingdoms and the Moorish fiefdoms at the time of the Roman Empire.

Later, the trade post of Sijilmasa (up until the 15th Century), the Moroccan Sunni and Sufi religious scholars who roamed Western Sudan (present-day Western Africa), the rise of the Almoravid dynasty in eastern present-day Mauritania and Senegal river lands and its sweep all over Morocco, Andalusia and parts of present-day Algeria, the Almohad’s rise from Southern Atlas Mountains and subsequent control of present-day Lybia, Tunisia, Algeria and Southern Spain –these and scores of other events have sealed forever the strong economic, political and cultural links between Fez, Tangiers, Marrakech or Sijilmasa on the one hand, and Timbuctu, Kumbi Salah, Kumasi, Benin City, Atar or Kidal on the other hand.

The Saadi Empire in the 16th Century reinforced this link via an agressive trade policy with Mali, Niger, Senegal and Volta Rivers Kingdoms and a renewed maraboutism, hereby disputing the legitimacy of centuries-long Ottoman designs on Morocco. The Alawites (17th century onwards) after them, used transsaharan trade, a strong claim to sainthood, and a pronounced multi-ethnic solidarity of destinies, to redefine Morocco as West African, a strong element in a spreading Tijani spiritual movement that united West African territories around one spiritual sensibility all the way from the Senegal River to the Gulf of Guinea, to the Tchad Lake, to Cyrenaica.

This brief historical digression is meant to dispel any confusion as to Morocco’s strong historical and cultural African belonging. A belonging that is made throughout history via an unstoppable exchange of people, goods, ideas, beliefs and power.

Colonialism created divisions and artificial boundaries. But even in their absurd, and mostly violent policies, colonisers unwillingly made Africans closer to one another. Whether it’s colonial soldiers brought from Senegal to quell mounting rebellion in Morocco, or the exile of the Moroccan King and his family in Madagascar, or Mandela’s secret visit to an ANC training camp in eastern Morocco, or Moroccan support for the Algerian Revolution, or Cabral’s political party self-imposed exile in Casablanca, or Agustino Nito’s use of a Moroccan passeport to run away from Salazar’s secret police for a hideout in Tangiers–all of these anecdotes, and scores of others lived by the free men and women of Africa fighting a brutal colonial rule, showed an African consciousness on the rise, a desire to unite for a common cause, that of liberation and the recovery of dignity, in which all African Peoples from Tangiers to Cape Town, from Saint Louis to Mombassa, and from Algiers to Kinshasa participated.

Anti-colonial struggle, the building of nation states and post-colonial aborted revolutions, coups and misrules, thwarted the rise of a strong African Unity. Cold war animosities, hegemonic designs and misunderstandings, have pushed Morocco in 1984 to leave the African Unity Orgnaization, without thereby truning its back on its African brothers and sisters.

Under the leadership of a young, dynamic and pro-african King, Morocco became a great player on the African scene of development, investment and South-South cooperation. King Mohammed VI, along with a new generation of modern, committed and savvy African leaders, paved the way for a new era of coorperation based on a strong desire to create wealth, jobs and stability, while paying specific attention to the youth, the marginalized and the elderly. Compassion, dignity and sense of responsibility are the new values preached by the King and his colleagues in Senegal, Ghana, Mali, Côte d’Ivoire, Kenya, Zambia, Guinea, Ruwanda, Ethiopia, Madagsacar and Tanzania. The colonial and post-colonial traumas are buried in favor of a New Age of enlightened governance, democracy and sustainable development.

The King of Morocco, in a speech in Addis Ababa on January 31, 2017, reiterated the historic message he had delivered in Abidjan, three years ago, when he had called on Africa to have confidence in Africa. Africans need to trust themsleves and their capacity to realize the African dream, guided by a new generation of entrepreneurial and visionary leaders and aided by the immense cultural wealth and diversity of their nations and peoples.

Two weeks ago in Addis, on the 28th African Union Summit, the King of Morocco and his colleagues from all of Africa, celebrated the long desired reunion of the African family, with Morocco coming back home, to reignite hopes and memories, the dreams of foudners like Mohamed V, Julius Nyerere, Juomo Kenyatta, Leopold Cedar Senghor, Patrice Lumumba, Houphouët-Boigny and various others. This proves once again that Africa is and will always be up to the expectations of its peoples.

All African leaders and peoples are now conscious of the need to work together, to be together and to struggle together to be at the forefront of the fight for dignity, growth and development and against wars, dictatorships, poverty and epidemics. The Cold War, Third Worldism, revolutionary rhetoric, and one-party systems are things of the past, relics of a time and an ideology that present and future generations do not relate to.

Pragmatism is the rule of the day nowadays in an Africa that is rising up to its potential. The African Dream is to be built brick by brick, through the toil and daily combat of its youth, women, and men, through the trust and belief of its peoples in a brighter future, through the visionary guidance of its new generation of rulers driven by the strong desire to see Africa cured of its woes and set on a virtuous road of pursuit of growth, happiness and prosperity. Last week in Addis, a huge road block was lifted, a huge step forward was made: an Africa that is now more unified than ever before will be stronger to face a future that is challenging in every way, for sure, but quite promising and full of hopes and dreams for better lives and brighter livelihhoods.