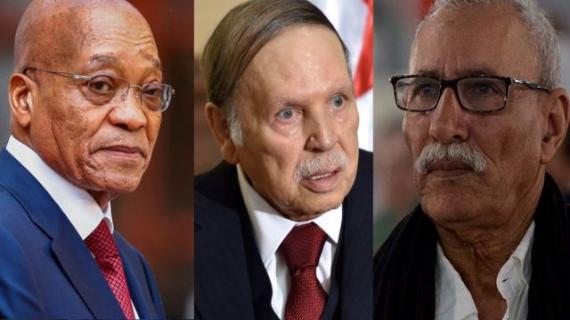 A South African court has issued an order on Wednesday to hold a vessel carrying 50,000 tons of Moroccan phosphates. The court justified its decision by citing a complaint from the Polisario that the ship was carrying phosphates originally from the Western Saharan city of Laayoune in southern Morocco.

While the Polisario has cheered the South African move, Morocco’s state-owned company Office Chérifien des Phosphates (OCP) said the court’s decision was based solely on the claims of one party, sounding optimistic that the ship would soon be released and continue its journey.

By all account, South Africa’s move to hold the ship carrying Moroccan phosphates is against the provisions of international law. Articles 17, 18 and 19 of the UN Convention on the Law of the sea guarantee to all states the right to traverse the territorial waters of other states.

This right is called the right of “innocent passages.” This right can only denied to other states in the event the ship traversing the territorial waters of other state may constitute a threat to the peace, security or good order of the coastal state, threaten its territorial integrity or political independence, engages in activities such military exercises, conduct surveys or research activities, engages in  acts of “of wilful and serious pollution contrary to this Convention,” “the loading or unloading of any commodity, currency or person contrary to the customs, fiscal, immigration or sanitary laws and regulations of the coastal State,” etc.

South Africa’s move cannot be justified by any of the provisions cited above. Therefore, it constitutes a violation of international law. In addition, South Africa cannot justify the detention using Polisario’s claim that the ship might carry natural resources originating from the Western Sahara. To this date, there is no provision in international law that prohibits Morocco from extracting phosphates located in the Western Sahara. The only entity habilitated to do so is the United Nations and there is no UN resolution calling on member states to detain any ships carrying Moroccan phosphates originating from the Western Sahara.

Exploitation of natural resources: a claim that does not stand scrutiny

Polisario’s complaint is based on an opinion made by Hans Corell, a former United Nations legal counsel. Answering a question by the Security Council in 2002 on offshore oil exploration on the coast of Western Sahara, the Swedish lawyer said that if “businesses of this kind were to proceed without a prior acceptance of the people of Western Sahara, and in disregard of their interest, such activity would be in violation of international law.”

Ever since, the Polisario has attempted to capitalize on this advisory opinion, accusing Morocco of “exploiting” the natural resources of the territory. To lay observers this accusation may sound credible. But an analysis of the facts shows that Corell’s judgement has no bearing on Morocco and was based on the assumption that the phosphate revenues Morocco earns from Western Sahara do not benefit the local population.

Second, since its return to Moroccan sovereignty in 1975, the Western Sahara has benefited from massive investments in its infrastructure. Thanks to the billions of dollars the Moroccan state has invested, the territory now boasts among the best infrastructure of all regions in the country. The region is poised to see  social and economic development skyrocket in the coming years, thanks to the massive projects launched by King Mohammed VI on the 40th anniversary of the Green March on November 6, 2015. Such projects seek to turn the territory into an economic hub, linking Morocco with Sub-Saharan Africa.

The Sahrawis living in Western Sahara are not only consulted on a regular by means of local, regional and national elections, but benefit from large-scale investments not readily available to other parts of the country. In a speech delivered on the 39th anniversary of the Green March, King Mohammed VI said that for every dirham earned from the Sahara, the Moroccan state spends seven dirhams for its development.

On the contrary, those who are deprived of the right to representation are the Saharawis in the Tindouf camps. For instance, the former Polisario leader Mohammed Abdelaziz was Secretary General of the Polisario for 41 years until his death in May 2016. In addition, while the Polisario claims the Saharawis are not consulted with regards of the exploitation of the natural resources of the Western Sahara, it refuses along with its main backer, Algeria, to allow the United Nations to conduct a census of the population in the Tindouf camps. The Security Council has for many years called on the Polisario and Algeria to facilitate such census, to no avail. In addition, Saharawis in the Tindouf camps are denied their rights to free movement and deprived of the right to obtain a refugee card or seek it elsewhere.

On the other hand, the European Union anti-Fraud committee (OLAF) issued a report in 2015 that documented how Algeria and the Polisario leadership have embezzled humanitarian aid destined for the Tindouf camps over the past four decades. Ten years earlier, a confidential report drafted by the inspector general of the UNHCR office unveiled the large-scale involvement of Algeria and the Polisario in the embezzlement of the humanitarian aid provided by the international community.

South Africa’s move is a political one, motivated by its determination to serve the agenda of the Polisario and Algeria and divert the attention of the international community from the core issue of the Western Sahara, which is the necessity for all involved parties to work towards reaching a mutually-acceptable political solution to the conflict.

Neither the UN Secretary General’s annual report on the Western Sahara nor the latest UN Security Council resolution on the conflict made any remote mention of the natural resources of the territory. That South Africa has never held any shipments bound for New Zealand for the past 30 years and chooses to do it at this juncture is very telling and plainly shows the political motivations behind this move.

This move, which comes less than a week after the adoption of a Security Council resolution that is unfavourable to the Polisario, is an angry reaction from South Africa at the behest of Algeria and seeks to refocus once again the debate around the question of the alleged exploitation of natural resources by Morocco.